Meerkats are one of the cutest animals you will ever see. But what does Meerkat mean in South African language? Meerkat is an Afrikaans word, roughly translated it means Marsh Cat. This meaning is quite strange because a Meerkat is not a cat and does not live near marshes. Instead its is a kind of mongoose. However, the term Meerkat was coined in 1776. Basically Meerkats are divided into 3 subspecies. The one in South Africa is called Suricata suricata siricata and the color ranges from brown to orange. The other two subspecies are found in Namibia and Angola. 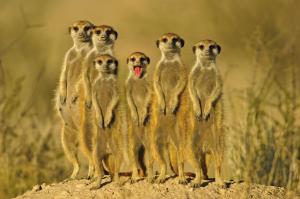 Now scientists believe that there is a fourth subspecies but investigations and research are still on. Suricate (Meerkats) are diurnal. They live in colonies of up to 30. The groups consist of 2-3 family units comprising a male, a female and their 2-5 young. They usually inhabit the burrows of ground squirrels, which they enlarge by digging with their sharp claws. When emerging from their burrows in the early morning, they tend to sunbathe before spending the day foraging for small prey. Adults take it in turns to stand on sentry, finding a convenient vantage point where they can watch for predators, such as eagles. If danger is sighted, the sentry gives a warning bark, and the meerkats flee to the safety of their burrows. If the threat is a snake, the adults will huddle together and drive the predator away. While sentries keep watch, other meerkats take care of the young. 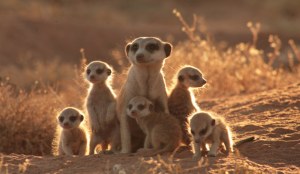 Meerkats are fascinating little animals that are highly entertaining to watch. The closest most people will get to a meerkat is at a zoo, where to the extent possible in their captive state, their natural behavior can be observed. Television documentaries of meerkats in their natural environment are another way of enjoying their antics. The ideal way to gain insight into the lives of these cute, furry creatures is to unobtrusively observe them in the wild. Grant Mc Ilrath, otherwise known as the Meerkat Man, has spent thousands of hours gaining the trust of a family of meerkats in their carefully guarded habitat. A group of meerkats is referred to as a “mob”, “gang” or “clan”, and after observing the interaction between individual meerkats within a group, many observers agree that the word “clan” is the most appropriate. In line with his policy of conservation through education, Grant takes groups of tourists to visit the clan of meerkats in Meerkat Valley. The exact whereabouts of the clan’s home is kept secret to ensure that they can continue to enjoy their natural environment undisturbed. Visitors are transported to their destination in a BMW which has been dubbed the “Meerkatmobile” and is the only vehicle that doesn’t scare the clan off. The last hundred meters or so is covered by foot and visitors take their ringside seats to wait for the sun to rise. As the sunlight creeps into the entrance of the clan’s home, the little furry face of Rafiki, the dominant male of the so-named Ungulungu clan, pokes out and if the coast is clear he leaves the tunnel. Once he has been assured by Grant, through a series of little sounds, that the group of spectators is not a threat, he stands on his hind legs, balancing himself with his tail and arms hanging over his abdomen in a typical meerkat stance. Soon the rest of the clan start emerging from the tunnel and begin to warm themselves in the sun, while watching the spectators with as much curiosity as the spectators are watching them.

Once the clan is sufficiently warmed up, they are off in search of juicy insect tidbits for breakfast, communicating with one another all the time and allowing the group of visitors to follow them. At all times the clan have sentries on the lookout for any perceived threat, which the sentry will quickly communicate to the rest of the clan so that defensive action can be taken. Meerkats are only truly happy in a family unit and for this reason it is cruel (and illegal) to keep a meerkat as a pet. Although the meerkats in Meerkat Valley seem at ease in spite of all the gawking humans, they have not been tamed in any way. The only reason that they are allowing humans into their personal space is because the Meerkat Man has gained their trust, and he takes great care to preserve that hard earned bond. Generally visitors to South Africa are keen to see the Big Five – elephant, buffalo, rhino, lion and leopard – not giving a thought to what Grant calls the “Shy Five” of the Little Karoo – bat-eared foxes, aardvark, porcupines, aardwolf and meerkats. A unforgettable Meerkat Magic experience will reveal just how fascinating the smaller creatures of Africa are. Meerkats are well regarded in the African culture, especially in Zambia and Zimbabwe, where it is known as the sun angel. Popular belief is that it protects the villages from the moon devil or werewolf which is believed to attack stray cattle or lone tribesman. You could also get up close and personal with cute meerkats in the Kalahari Desert. Tswalu Kalahari is home to a family of 24 mischievous meerkats, all of which can be seen at close range racing around the dunes, jumping in and out of burrows and hiding from predators. In addition to playful meerkats, visitors to the Tswalu Kalahari can spot a number of other animals, including the black-maned Kalahari lion and the desert black rhino.

One thought on “Meerkats”