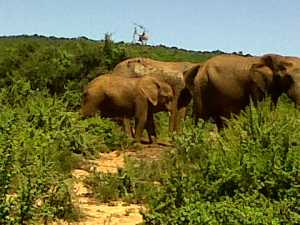 Our road trip so far had brought us deep into the dense valley bushveld of the Sundays River region of the Eastern Cape, the Addo Elephant National Park. Here the grey leviathans of the bush roam in peace, safe from the relentless hunting of elephants in the past. The original elephant section of the park was proclaimed in 1931, when only 11 elephants remained in the area.

Today this finely tuned ecosystem is a sanctuary to over 450 elephants, Cape buffalo, black rhino, a variety of antelope species, as well as the unique flightless dung beetle, found almost exclusively in Addo. There are plans underway to expand the 164 000 ha Addo National Elephant Park into a 360 000 ha mega-park. Addo is the third largest national park in South Africa and a malaria-free region; the park encompasses five of South Africa’s seven biomes which gives rise to plants usually found in vastly different locations co-existing side by side in the National Park.

Having spent only one evening, we decided to forfeit the next night at the SAN Parks Addo and drive up to Kuzuko Lodge which lies in a private concession to the north of the Addo Elephant National Park enjoying uninterrupted views of the Karoo Plains and the Zuurberg Mountains, 30% of the 15,000ha private reserve is under Spekboom with an ongoing cultivation programme in place. Plans include the proposed proclamation of a 120,000ha (296,500 acre) marine reserve that includes islands that are home to the world’s largest breeding populations of Cape gannets and second largest breeding population of African penguins. 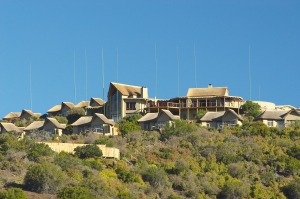 The road to Kuzuko Lodge is a scenic stretch through mountains and across valley plains, there were some stop-and-go road maintenance and the rest of the road was in good condition. The only roadside attractions are the local people selling prickly pears on the side of the road and the rare intersection. Once you turn off the main road there is a dirt road for the last stretch past old deserted farmhouses.

The Lodge reception is separate to the Lodge itself, transfer to the lodge is via a game vehicle. There are 24 luxurious chalets, each with a private deck offering spectacular views of the malaria free Karoo bushveld of the big five park below. All chalets, three of which are wheelchair accessible, features an en-suite bathroom with bath and walk in shower, mini-bar, tea/coffee making facilities, colour television, direct dial telephones, wireless internet connectivity and data cable points. 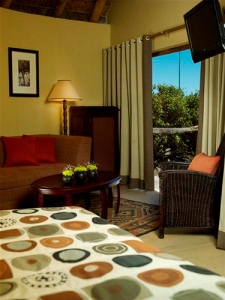 All chalets are luxuriously laid out and air-conditioned. Standard features include DSTV, unlimited free Internet access, tea and coffee-making facilities, bath and shower, safe, mini-bar, hairdryers and international adaptors. All units have private patios. All rooms have twin beds and can be made up as doubles and have a foldout couch for children. Having arrived just in time we joined the evening game drive.

The delays with the road works had put us back a bit, so we arrived immediately after the game drive vehicles had left. We were taken to a game vehicle a few kilometres up the hill, where we joined a quiet Italian family for the evening’s game viewing. The area is classified as semi-arid to arid, receiving an average rainfall of less than 445 mm per year, rainfall is relatively evenly distributed throughout the year, but there are two peaks, in February-March and October-November with frost occurring at times in winter. There is no natural water in this section of the park and boreholes feed all waterholes, there are a number of small pans in the area but these are dry except in years of exceptional rainfall. The number of game in the area is low due to the heavy drought experienced a short-while back, the numbers are being carefully restored. The highlight of our game drive was the sighting of two male Cheetahs.

We arrived back at the lodge just after nightfall, at the entrance we received warm hand cloths and headed straight to the restaurant. The Kuzuko Lodge Restaurant is stylish and comfortable; it has various dining options, fabulous set menus, tempting light meals and a special menu for younger guests. It is open every day for brunch, high tea and dinner. There is a special Deck menu available for light lunches or you can join a Boma evening and try their traditional ‘over-the-coals meals’, there are some less traditional side dishes for those who are less adventurous. 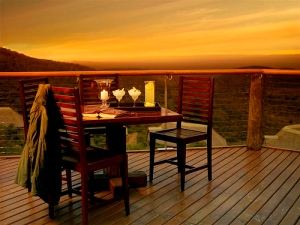 The entire experience was very good, as was the service. The staff compliment is predominantly locals from the surrounding area, which is great. That evening we spent on the outdoor ‘stoep’ looking over the African plains watching a far off lightning storm on the distant horizon, above us open starry sky’s. The rooms are superb and our entire stay was impressive, there is an authentic feeling of being ‘out in Africa’. It is here where the evening’s silence is broken by the howl of the black-backed jackal and the francolins’ call heralds each new dawn.