Imagine the Western Cape thousands of years ago, a fertile paradise, teeming with life, crossed by huge herds of game, hunted by the nomadic San people.  Imagine a later time when this culture doubled, with the San remaining as hunter gatherers, and the Khoi Khoi joining them as nomadic pastoralists, keeping abundant herds of fat-tailed sheep and Sanga cattle.  They developed into a complex nation of captains and kings.  Both cultures retained their sophisticated language and religious systems, bound by a treasure trove of stories and legends.  Then imagine the arrival of Jan van Riebeeck and the insatiable demand of these seafarers for fresh produce, cattle and labour.  Try to imagine the cruelties inflicted on the Khoi as they saw their grazing lands disappear and their cattle taken, usually by force.  Anyone who has read J.M. Coetzee’s DUSKLANDS or Dan Sleigh’s ISLANDS will have some idea of the atrocities that were inflicted on the Khoi Khoi and Bushmen people.

Yet, on 17th June 2011 a unique ceremony of reconciliation took place on Solms-Delta Estate.  A direct descendent of those ancient San and Khoi kings, Khoebaha Cornelius, leader of a Royal House of the Khoisan, presided over a moving event in which the memories of the injustices suffered by his people in this part of the Western Cape were washed away.  It was in some ways a re-enactment of the proceedings of the TRC, as history was retold by its victims in the presence of the perpetrators.  However, as the King pointed out, the difference was that Mark Solms had asked the ancestors of the Khoi people to forgive the evils that had happened in the past (something that Archbishop Tutu has been trying to persuade all white South Africans to do.)  The King also thanked Mark Solms for the part that he has played in rescuing and reviving the culture of the Khoi people, saying, “You can’t change the past, but you can rectify the present.” 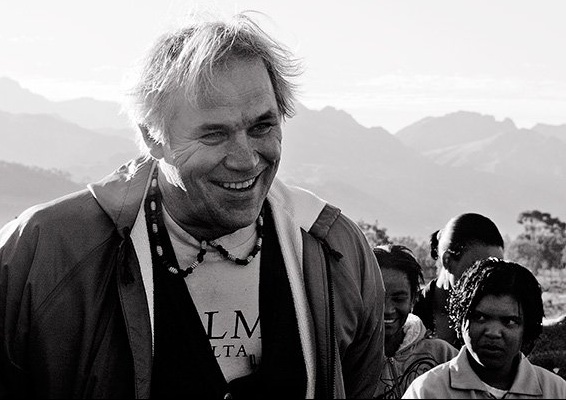 Mark Solms said: “I consider it appropriate to ask the ancestors of the Bushmen and the Khoi to forgive the arrogance of the present, as we forget that they were the first people to occupy this land.  We also forget that they were the ancestors of us all; we are all one family.  I hope they forgive us for forgetting this, and for what we have done to each other over the years.  We even forgot that we are all feeling beings.”  Fittingly, the setting for the ceremony was the Dik Delta Heritage Garden, which is dedicated to the cultivation and preservation of culinary and medicinal Khoisan herbs.  In preparation for the ceremony, two circles of white stones had been laid between the garden and the fields in which the fat-tailed sheep and Sanga cattle are still kept.  In the middle of the circle was a huge pile of firewood.  A kraal made of reeds had been built to house the sheep and the lamb that would be sacrificed at dawn the next day.

As the sun began to set, the king ordered the fire to be lit by the senior headmen of his entourage.  Two sets of kudu horns were laid to the east and west of the pyre.  Bunches of dried hotnotskoigoed herbs were attached to the horns and lit.  The fragrant smell of the herbs wafted over the participants and the onlookers.  One of the headmen briefly retold the story of the Khoi and reminded the audience that their culture was a matriarchal one, through which the bounties of nature were worshiped. 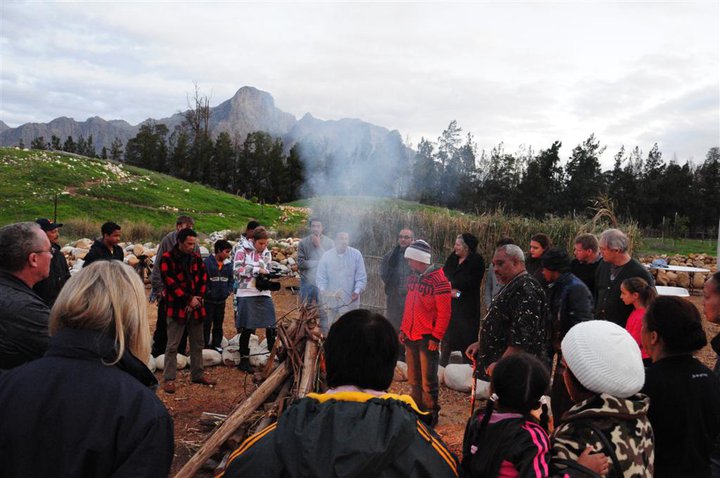 Then the gathering waited for the moon to appear so that the next part of the ceremony could take place.  As the wintry night grew colder, the onlookers huddled round the warmth of the burning bonfire.  Just after eight o’clock a glorious orange moon rose and the king announced that the spirits of the ancestors would now be summoned from the four corners of the earth.  Two headmen picked up the kudu horns, with their glowing embers of koigoed, and turned to face the four corners of the compass.  As they turned, one of them called out the names of great ancestors: Jan Jonker Afrikaner, King Ndoda, Coree Harlene Sasman, Autshumato (“Herrie”) and Krotoa (“Eva”).  Then the King and his retinue settled down near the fire, while two young men prepared to spend the night in the kraal with the sheep that would be sacrificed at dawn.  At daybreak the next morning, Mark Solms dipped his hands in the blood of the newly slaughtered animals and symbolically washed away the pain of the past in buchu water.  The tip of a spear was dipped in the blood and washed, to symbolize the ending of the conflict between our peoples.

The final act was the consecration of a piece of ground with blood, followed by the burial of objects valuable to the King and to Mark Solms.  A covering of small stones identify this holy place and, from now on, all people who pass here will place a stone on the cairn.  Thus it will become a constantly renewed shrine to our forgiveness and mutual reconciliation.  After the sheep had been skinned, the meat was cooked in pots on the open fire that had been burning continuously since the previous night, and the king, with a twinkle in his eye, announced a feast “that was going to last five days!”  Truly a remarkable and historic moment on the Solms-Delta estate, which is already noted for its recovery and preservation of the rich cultural heritage of the Western Cape and the Boland.